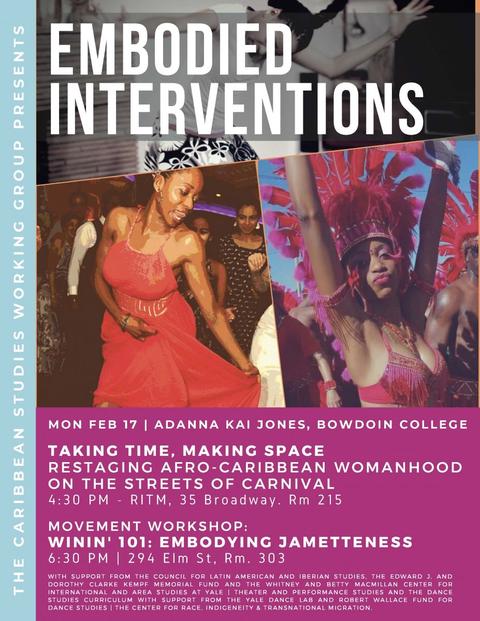 Adanna Kai Jones | Assistant Professor of Dance, Bowdoin College
RITM - 35 Broadway, Rm 215
Through a deep consideration of the masquerade “Whitewash”—a processional performance presented by New Waves! NY at the 2017 annual West Indian-American Day Carnival of Brooklyn—this talk unveils the transgressive ways Carnival revelers carnivalized the streets of Brooklyn with their spectacular improvisatory dancing skills. As a band member of “Whitewash,” I witnessed Makeda Thomas—who is both the founder of New Waves!, a Trinidad-based, performance-centered institute, and the bandleader of our small masquerade band—with her (fairly new born) babe in arms, her pregnant sister, and her mother scold the NYPD officers assigned to our band on how Carnival and time was meant to operate. In other words, the ways in which dancing bodies of the “Whitewash” masquerade transmitted representations of Caribbean nations under the disciplinary eye of the NYPD blatantly revealed the sweaty, laborious ways Afro-Caribbean bodies challenged, resisted, and transgressed state/white/police time and its effects. At the level of their bodies, “Whitewash” transgressed the NYPD’s policies and renegotiated how time occurred along the Eastern Parkway, as well as how black bodies were visually consumed. Each dancing, reveling, masquerading, Diasporic body, thus found themselves toggling between multiple constructions of blackness and citizenship as they made space to jump, wine, and chip dong di road.
Embodied Interventions is a semester-long initiative that explores embodied interventions to interdisciplinary research methodologies, scholarly and creative production, and theoretical terrains. We will host three scholars working on embodied research methodologies in and across the Caribbean and its diasporas – Adanna Kai Jones, Dasha Chapman, and Maya Berry. Each will give a talk on their current research and then lead a movement workshop, offering a chance to engage with their embodied praxis and methodologies. Movement workshops are open to all levels of movers.
The initiative is coordinated by the Caribbean Studies Working Group, with the support of the Council for Latin American and Iberian Studies and The Edward J. and Dorothy Clarke Kempf Memorial Fund and The Whitney and Betty MacMillan Center for International and Area Studies at Yale; by Theater and Performance Studies and the Dance Studies curriculum with support from the Yale Dance Lab and Robert Wallace Fund for Dance Studies; and by the Center for Race, Indigeneity, and Transnational Migration.
The first event in this series will take place February 17th with Dr. Adanna Kai Jones