The Candidate: The Past, Present, and Future of Media and Democracy 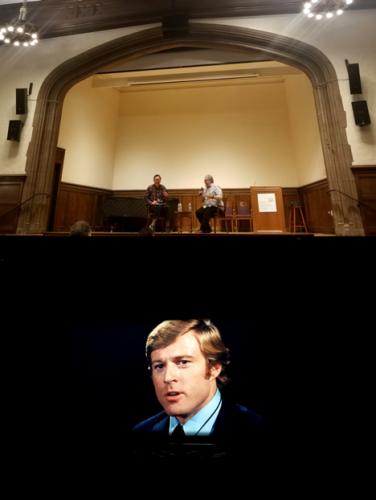 March 11, 2019
On Thursday, May 7, 2019, Democracy In America screened the film The Candidate (1972) at the Whitney Humanities Center auditorium. This avant-garde film followed a Californian lawyer as he experienced and endured the process of rising to the highest echelons of power to become a US Senator. However, the movie wasn’t merely a dissection into the political body of the United States. It was also a fantastic immersion into the role of new technologies such as television and the way that the new media landscape prominently re-shaped politics between the 1960s and 1970s.
As American Studies Professor Matthew Jacobson and Professor of Slavic and Media and Film Studies John MacKay pointed out during the insightful and lively talkback after the movie, there were so many resonances between the way the movie portrayed the new political practice back then and today. In some ways, how politics became a “show” in The Candidate - where images and theatrics became a focus instead of the message - is a prominent feature of American, if not global, politics today. Throwing a football on television to showcase the candidate’s youthful vigor rather than discussing the details of a health care reform, for example, has become the political modus operandi.
The engrossed audience shared their own thoughts on the simultaneous novelty and familiarity of the portrayal of American politics in the movie. It left the audience excited to see what new insights the next film, Selma (2014) -being screened here at the Whitney Humanities Center on April 4th at 7:30 pm - would provide. For more, visit democracyinamerica.yale.edu